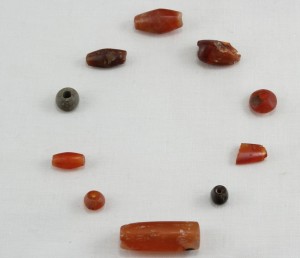 At least I assume they were girls. It’s not certain of course. But from what the Bible tells us and what we observe in most societies, women were more into jewelry than men. In Biblical times they certainly were into their jewelry, particularly their necklaces, it seems. So string together a few beads, maybe the occasional shell and you’ve got a nice necklace. The beads were delicately made. Here’s a small selection found at Tell Halif in southern Judah. Most of them are probably from the 8th century BCE, that’s the time of king Hezekiah of Judah. Because the stone the beads are made from isn’t available locally, the beads must have been traded from further afield. Some of the beads are a bit damaged, but it’s clear how nice they would have looked back then. But just imagine the disappointment when a necklace opened and the beads spilled all over the floor, only to be found by archaeologists thousands of years later. 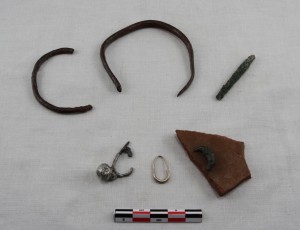 But who would want to be content with colorful necklaces? What about a silver or gold earring? Or a bangle of polished iron?
One of the earrings has been welded to a potsherd in an intense fire. We left it there, rather than trying to remove it from the potsherd.
I’m not quite sure what the pin to the right would be used for, but I’m always open to suggestions.

So you can see, it was important to be pretty in Biblical times. People were concerned with looks. There are indications that they were not as much into their fashion as the Philistines or Egyptians and lived quite modestly. But that doesn’t mean people went without jewelry.