We finally came upon floors at Khirbet Summeily and found a few interesting objects lying on them. Amongst them was this nearly complete juglet.

We are not sure what it contained, but perfume might be a good guess, or some other aromatic. Inside we found small stems of a thorny bush. Until we have confirmation of the botanical samples, we can only speculate. 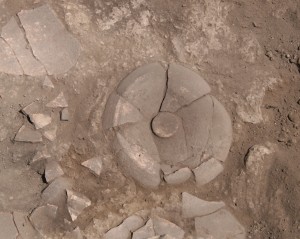 And right next to it (but only excavated later) we found this spectacular bowl on the surface. It’s not often that archaeologists find such nicely preserved pottery. We’re lucky. The village we’re digging up had been destroyed and burned, leaving an ash layer that covered the remains, sealed them in. In places, the layers eroded, but where the ash still covers the floors, we do get an indication of life in Ancient Judah.