The Lahav Research Project seeks to shed light on the life and history of the Lahav area in southern Israel, particularly through archaeological and related investigations centred on Tell Halif.  Excavations started at Tell Halif in 1976.  The Cobb Institute of Archaeology at Mississippi State University sponsored excavations from 1983 to 1999.  It continues to be involved with the investigations, even though the latest phase has been led through Emory University.

Tell Halif has rich remains from the Iron Age, the time of the Old Testament.  A large fortified city stood on the tell during the days of king Hezkiah.  It was destroyed at the end of the 8th century BCE, probably during the invasion of the Assyrian king Sennacherib in 701 BCE.

The site is thought to be biblical Rimmon, also called En-Rimmon – spring of the pomegranate in English.

Further information can be found on the website of the Cobb Institute of Archaeology and the Tell Halif blog.

Five volumes on investigations at Tell Halif have been published. 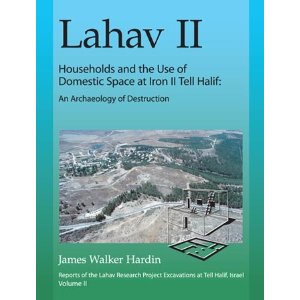